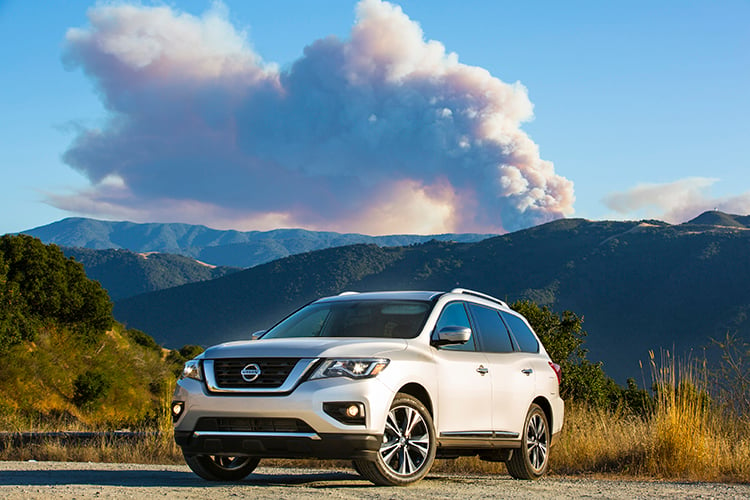 The Rear Door Alert system can help remind customers of anything that may be forgotten in the rear seat – pets, valuables, dry cleaning, groceries and more. If the system detects that a rear door is opened prior to driving, and the customer does not open a rear door again at the end of the trip, the system can remind customers that something might be left in the rear seat. RDA is designed to be simple, unobtrusive and easily turned on or off as needed.

In addition, Automatic Emergency Braking (AEB) is now standard on the 2018 Pathfinder – part of a projected one million 2018 U.S. Nissan vehicles, including seven of the company's most popular models, to offer the advanced system. AEB3 (previously known as Forward Emergency Braking) uses radar technology to monitor a vehicle's proximity to the vehicle ahead, giving the driver audible and visual display warnings to alert the driver to reduce the vehicle's speed if a potential frontal collision is detected. If the driver fails to respond, the AEB system can apply the brakes, helping the driver to avoid the collision or reduce the speed of impact if it is unavoidable.

The seven-passenger 2018 Pathfinder is offered in 2-wheel-drive and 4-wheel-drive configurations, and in four well-equipped grade levels: S, SV, SL and Platinum.

To learn more about the new 2018 Nissan Pathfinder, visit here.

In North America, Nissan's operations include automotive styling, engineering, consumer and corporate financing, sales and marketing, distribution and manufacturing. Nissan is dedicated to improving the environment under the Nissan Green Program and has been recognized annually by the U.S Environmental Protection Agency as an ENERGY STAR® Partner of the Year since 2010. More information on Nissan in North America and the complete line of Nissan and INFINITI vehicles can be found online at www.nissanusa.com and www.infinitiusa.com, or visit the U.S. media sites nissannews.com and infinitinews.com.

Nissan is a global full-line vehicle manufacturer that sells more than 60 models under the Nissan, INFINITI and Datsun brands. In fiscal year 2016, the company sold 5.63 million vehicles globally, generating revenue of 11.72 trillion yen. Nissan engineers, manufactures and markets the world's best-selling all-electric vehicle in history, the Nissan LEAF. Nissan's global headquarters in Yokohama, Japan, manages operations in six regions: Asia & Oceania; Africa, Middle East & India; China; Europe; Latin America; and North America. Nissan has a global workforce of 247,500 and has been partnered with French manufacturer Renault under the Renault-Nissan Alliance since 1999. In 2016, Nissan acquired a 34% stake in Mitsubishi Motors, which became the third member of the Alliance – a grouping with combined annual sales of almost 10 million units a year.