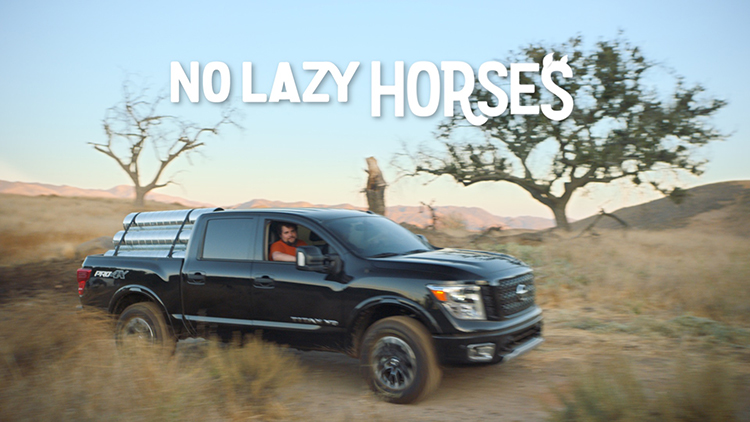 According to retail sales data from Strategic Vision, both TITAN half-ton and TITAN XD owners have median ages three to four years younger than the industry average1. The same data reveals TITAN has a higher share of Millennial buyers than the segment's two best-selling nameplates. However, it is with Generation X buyers where TITAN really over indexes, with 34 percent of TITAN sales in this demographic – 10 percentage points above the segment average.

"Over the years truck advertising has become very formulaic with stamped metal, rock crushing and chest-beating," said Jeremy Tucker, vice president, marketing communications and media, Nissan North America. "We are looking to use humor to appeal to a younger demographic for the Nissan brand. "No Lazy Horses" allows us the chance to break the mold and reinforce what TITAN has to offer – best-in-class standard horsepower3, a class-leading warranty2 and great value."

As a relatively new player in the truck market, TITAN needs to stand out and pursue new customers in a diverse and growing segment. From the launch of the redesigned TITAN in 2015, Nissan has opted to approach the truck market differently.

It began with the TITAN XD – a "new class" of full-size pickup featuring a unique Cummins® 5.0L V8 Turbo Diesel engine that sits in the "white space" of the industry between the traditional half-ton and heavy-duty segments.

"TITAN is a serious truck that has very serious reasons it should be considered by people shopping for pickups," said Billy Hayes, division vice president, Trucks, LCV and South/Mountain Regions. "But that doesn't mean we can't have fun getting the message across."

The Nissan TITAN is available in dealer showrooms in three cab configurations: Crew Cab, King Cab and Single Cab, and five grade levels: S, SV, PRO-4X, SL and Platinum Reserve. TITAN also comes with many popular features such as the Utili-track® Bed Channel System, allowing for endless tie-down possibilities, and a factory-applied spray-on bed liner. With the highest standard horsepower in the class3 and an industry-best truck warranty2, TITAN is no lazy horse.

For more information on the Nissan TITAN and the complete Nissan vehicle lineup, please visit nissannews.com.

About Nissan North America, Inc.
In North America, Nissan's operations include automotive styling, engineering, consumer and corporate financing, sales and marketing, distribution and manufacturing. Nissan is dedicated to improving the environment under the Nissan Green Program and has been recognized annually by the U.S. Environmental Protection Agency as an ENERGY STAR® Partner of the Year since 2010. More information on Nissan in North America and the complete line of Nissan and INFINITI vehicles can be found online at www.nissanusa.com and www.infinitiusa.com, or visit the U.S. media sites nissannews.com and infinitinews.com.

About Nissan Motor Co., Ltd.
Nissan is a global full-line vehicle manufacturer that sells more than 60 models under the Nissan, INFINITI and Datsun brands. In fiscal year 2016, the company sold 5.63 million vehicles globally, generating revenue of 11.72 trillion yen. Nissan engineers, manufactures and markets the world's best-selling all-electric vehicle in history, the Nissan LEAF. Nissan's global headquarters in Yokohama, Japan, manages operations in six regions: Asia & Oceania; Africa, Middle East & India; China; Europe; Latin America; and North America. Nissan has a global workforce of 247,500 and has been partnered with French manufacturer Renault under the Renault-Nissan Alliance since 1999. In 2016, Nissan acquired a 34% stake in Mitsubishi Motors, which became the third member of the Alliance – a grouping with combined annual sales of almost 10 million units a year.