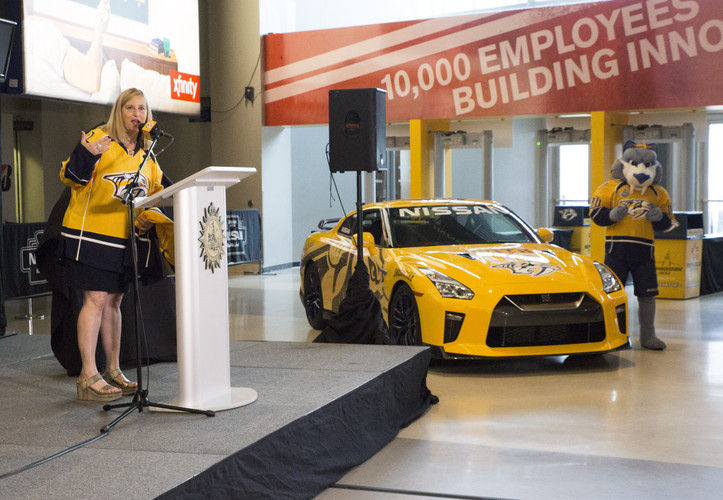 NASHVILLE, Tenn. – Nissan today announced the donation of a specially created 2017 Nissan GT-R supercar to the Nashville Predators Foundation, which supports a variety of local Nashville charities. The $109,990 GT-R Premium model is custom-painted in Preds’ official colors and graphics. The special Nissan GT-R will be the main attraction in an upcoming Predators Foundation fundraising auction that was also announced today.

"Nissan is proud to call the great city of Nashville home for our North American headquarters – and we are thrilled that our hometown Predators have come so far this season," said José Muñoz, Chief Performance Officer, Nissan Motor Co., Ltd.; Chairman, Nissan North America, Inc. "This supercar is dedicated to Nashville and Predators fans all over the world. We hope it raises a lot of awareness and funds for the work of the Predators Foundation."

The Nashville Predators Foundation has announced that the auction is now live. Fans can either text "Nissan" to 52182 or visit www.Nissan.gesture.com to bid on the car. Also included with the auction prize are two 2017-18 season tickets and a parking pass for the Sixth Avenue Garage to help you continue supporting the Western Conference Final Champion Predators!

"Today, Nissan is making the largest one-time contribution to the Nashville Predators Foundation and with that, giving one lucky bidder the opportunity to show off their Preds Pride every time they drive Predzilla," said Predators President and Chief Executive Officer Sean Henry. "Not only is this one-of-a-kind car going to be the envy around Smashville, it will also benefit many local charitable and community service organizations through the winning bid. With Nissan’s support for our community and passion for our team, we get to reach thousands more individuals all across Tennessee."

Huge thanks to @NissanUSA for donating this Nissan GT-R to be auctioned off for the @PredsFoundation! #Preds pic.twitter.com/GKTAqjpr4J
— Nashville Predators (@PredsNHL) June 5, 2017